I’ve just returned from a week-long road trip into the North Coast Ranges (Sonoma, Lake, and Napa Counties) where the goals were to 1) visit friends and 2) do a little field research at McLaughlin Research Station. The focus of the latter was Trichostema laxum (Turpentine Weed, Lamiaceae), which normally looks like this:

This plant usually occurs in large patches of plants (hundreds to many thousands of plants) in serpentine seeps (see previous blog posts for a description of this cool habitat). In many populations, 1 to a few individuals are pink instead of purple: 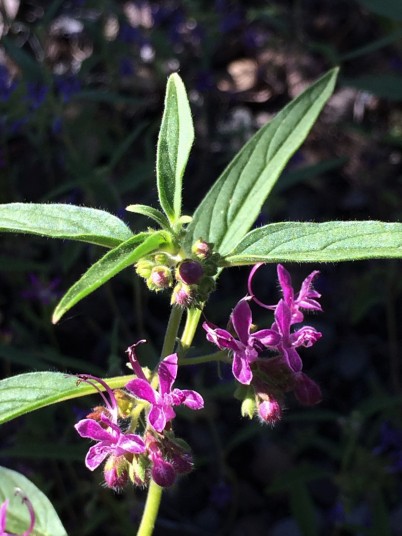 This color is the result of a recessive mutation, and plants with pink flowers seem to be otherwise just as healthy and have otherwise the same traits as purple-flowered plants. Pollinators don’t really seem to notice the color difference, and will freely visit these mutants. The goal of this research is to take advantage of the mutation by finding, marking, and measuring pink-flowered plants, and then collecting their seeds. Because this is a super rare recessive trait, if the offspring are pink, it is very likely they are the result of self-pollination. Conversely, any purple-flowered progeny must be the result of out-crossing with another plant. Therefore if we can find a bunch of pink individuals, we can ask interesting questions about how things like the number of flowers, the flower shape, and the environment (such as whether the area has recently burned) affect outcrossing rates.

While the focus of this week was not at all recreational botany, of course I found and photographed a few plants.

First some relatively broadly distributed species that have not yet made an appearance on this blog. Clarkia amoena (Farewell-to-spring, Onagraceae)–a beautiful annual that is readily available as a garden ornamental.

Lilium pardalinum (Leopard Lily, Lilaceae)–I actually have photographed and posted this one before, but it was a few years ago on Facebook, and it’s enough of a show-stopper that I’m re-posting.

and Mimulus bolanderi (Bolander’s Monkeyflower, Phrymaceae)–while this species is relatively common, especially in the central Sierras, plants in the inner North Coast Ranges such as this one are much smaller-flowered than elsewhere and may represent a distinct subspecies (or even a different species).

As I’ve blogged about previously, McLaughlin is a hotbed for rare flowers because it has large outcrops of harsh serpentine soils. While I’ve previously found and photographed many of these, I managed to add a few new ones this trip:

Collinsia greenei (Green’s Blue-eyed Mary, Plantaginaceae), the only all-purple member of the genus

Streptanthus morrisonii (Morrison’s Jewelflower, Brassicaceae). I’ve said it before and I’ll say it again, you really have to meet plants in this genus in person for full appreciation. The yellow things sticking out of the flower are two sterile stamens than are fused together–function unknown. 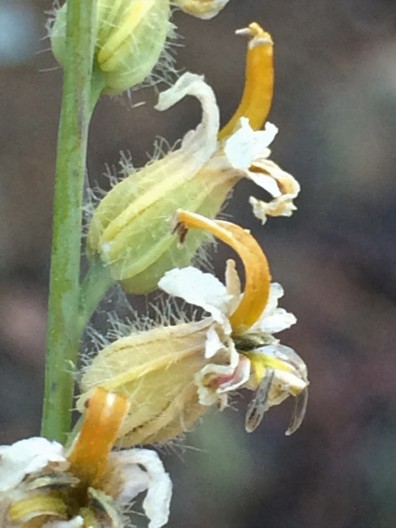 And two plants that are in fruit, rather than in flower: Lomatium repostum (Napa Biscuitroot, Apiaceae) 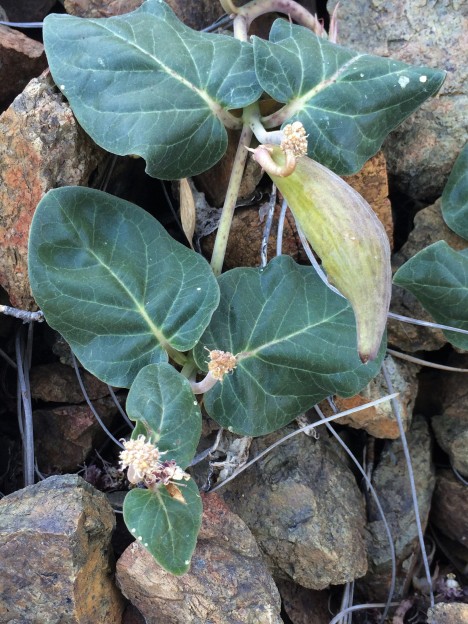 The former species has pretty boring flowers, so the fruiting stage is actually more photogenic. I’m a bit sad I missed the flowers on the latter, however, as it has beautiful purple and white flowers. It was still neat to see the typical milkweed pod on this weird prostrate plant. This plant may be from the southernmost population of this species.

I’m still debating, but I think my itinerary for next week will involve more rare serpentine plants from even further north. Who knows, maybe I’ll even find a flowering Serpentine Milkweed.

One thought on “Botany on the Side”