I just spent a good portion of last week driving around Southern California chasing flowers. My last stop in at Santa Rosa and San Jacinto Mountains National Monument had enough beautiful and unique things to warrant its own post–I’ll add that in a couple days. But first I want to show off some of the highlights from the rest of the trip, in which I looped around the Western, Northern, and Central Mohave. My first stop was the Kelso Valley, where the western Mohave meets the Southern Sierras. I had stopped here a few weeks ago, but not much was blooming then. This time I got the timing right, and found the rare monkeyflower for which I was looking, Mimulus shevockii (Kelso Valley Monkeyflower, Phrymaceae) 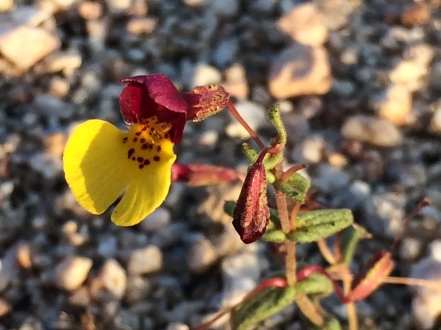 The spot also had another uncommon and extremely tiny plant, Canbya candida (Pygmy Poppy, Papaveraceae). I was there early in the morning so the flowers are still closed from the night before. For a sense of scale, the “pebbles” around the plant are actually grains of sand.

I then headed over Walker Pass toward the desert floor, stopping to look for a rare species of Astragalus which was not yet in bloom. I did get a consolation prize of a more common species in the same genus, Astragalus purshii (Woolypod Milkvetch, Fabaceae). 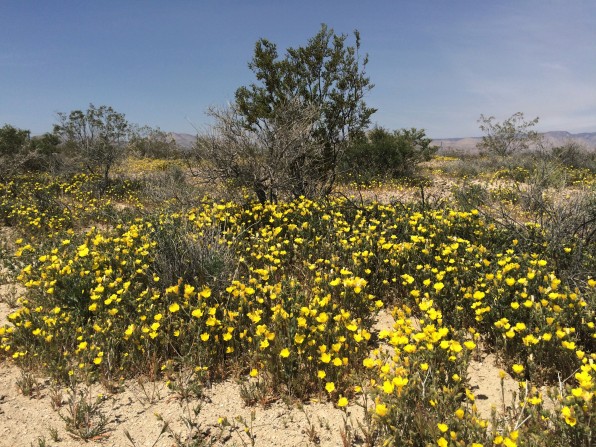 Also in the area were some nice patches of Linanthus parryae (Sand Blossoms, Polemonaceae). Individuals either have white or purple flowers, sometimes in the same population, as you can see from the second photo. 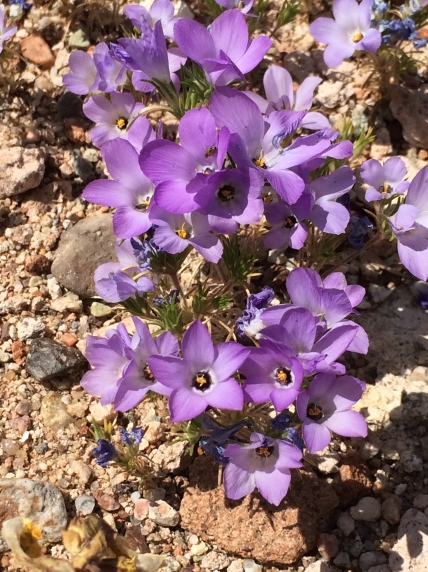 Further to the southeast at lower elevations, I made a quick stop in some Saltbrush Flats and found the uncommon Goodmania luteola (Yellow Spinecape, Polygonaceae). I know it doesn’t look like much, but it’s the only species in its genus, and to a plant nerd like me, that makes it pretty interesting.

From the Western Mohave, I made the long drive to Death Valley National Park, where I had hoped to find a few beautiful and rare species that only occur on limestone cliffs in the Northern part of the park. Unfortunately, I got the timing wrong, and I was too late to catch these short-lived annuals. That’s not to say the trip wasn’t worth it though. On the way in, I found a couple common, but interesting species 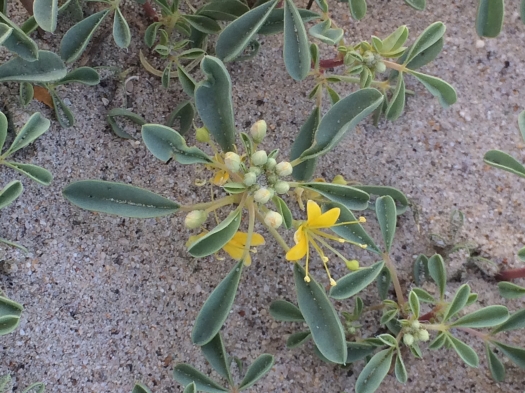 Eucnide urens (Desert Rocknettle, Loasaceae), a shrub with extremely sharp hairs that I know now not to touch.

Despite striking out on the limestone specialists, I did find a couple of rare plants. Salvia funerea (Death Valley Sage, Lamiaceae) is a unique, incredibly woolly shrub with a funky smell found in the mountains around the valley.

The clear prize of the Death Valley leg of the trip was Enceliopsis covillei (Panamint Daisy, Asteraceae). This beautiful sunflower is only found in gypsum soils in a few canyons on the western side of the Panamint mountains. It’s the logo for the California Native Plant Society: 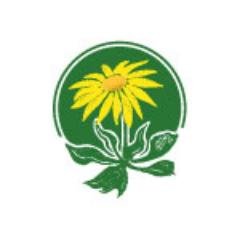 When I got to the area, I was dismayed to find the only road that goes through the range of the species was closed. I quickly formulated a back-up plan, driving as close as I could to the mountains, picking what looked like an interesting canyon with gypsum (the white rock below), and walking in. 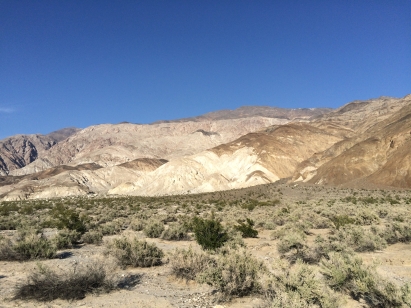 About a mile up the canyon, I found one individual growing completely by itself on the side of the canyon. I shouted pretty loud when I saw it. 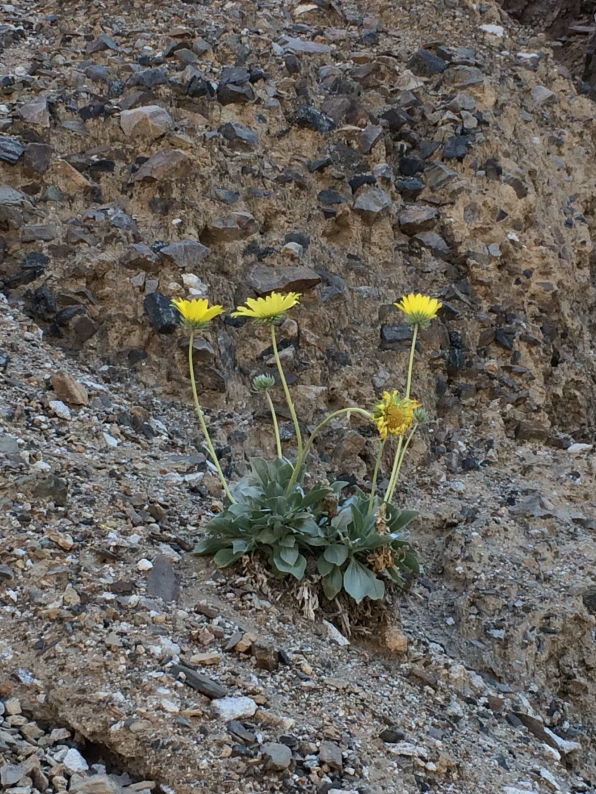 After leaving death valley, I spent an evening and morning botanizing around the Barstow area in the Central Mohave. There were a number of interesting plants in the area, including a couple more species from the extremely diverse sunflower family (Asteraceae), Nicolletia occidentalis (Hole-in-the-Sand Plant) and Adenophyllum cooperi (Cooper’s Dogweed, shown with a sleeping bee-fly, Bombylius sp.). 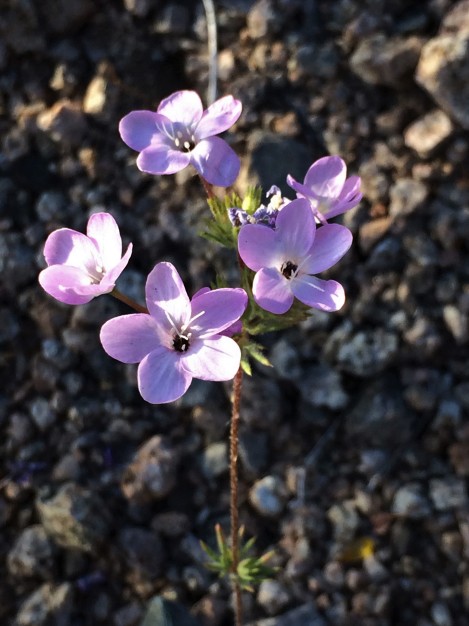 Loeseliastrum matthewsii (Desert Calico, Polemoniaceae) was just beginning to bloom in the area. 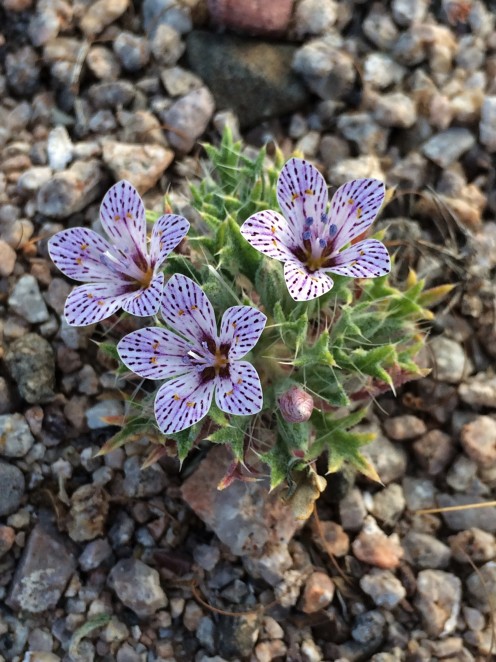 From Barstow, I made the long drive south to the Santa Rosa Mountains. I’ll detail those highlights in my next post.