Rather than head east as originally planned, I returned to the Mojave this weekend, spending most of the trip botanizing in San Bernardino County. This is the largest county in the lower 48, just a bit smaller than the whole state of West Virginia. More specifically I looked for a few target species in the areas around the town Barstow and the San Bernardino Mountains. I spent most of the time at the bases of mountains, where many species are in full bloom…

but heading up into the San Bernardino Mountains to camp where the Joshua Trees meet Pinon Pines and Junipers. I will definitely be back to these mid-elevation forests when they start to bloom.

It’s fun to plan a trip around picking some interesting rare plants to chase down. Even if you don’t find them, rare species tend to occur in places that have lots of other cool things. I find my target plants using the amazing website, Calflora.org. Here you can sort through the thousands of plants found in the state with many useful filters. For this trip I chose herbs with more than 3 records in San Bernardino County that bloom in March and are listed by the native plant society as rare or having a limited distribution. From the couple dozen plants that generated, I then chose four species that seemed super interesting to me, and plotted records on my atlas that were collected relatively recently with clear location information. I went three for four on my main targets:

Mentzelia tridentata (Three-toothed Blazing Star, Loasaceae), only found in the Central Mohave around Barstow. Yes, it looks pretty similar to the much more common Mentzelia invulcrata that I posted a picture of a couple weeks ago, but this species has really interestingly-shaped stamens which you can see in the first picture, and mostly green instead of mostly white floral bracts which you can see in the second. 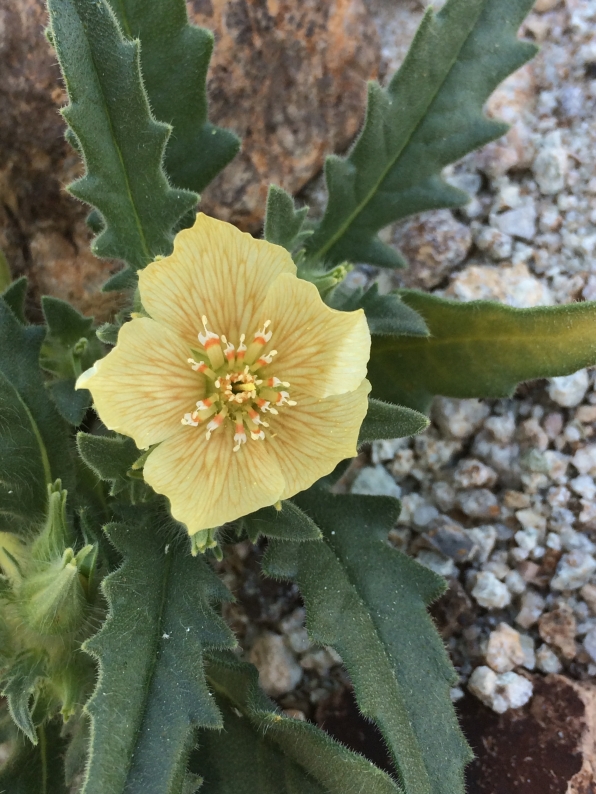 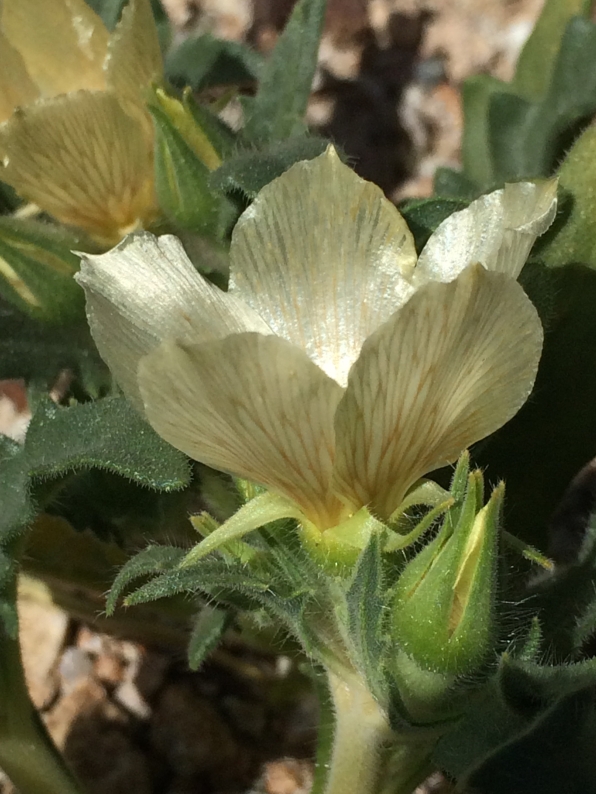 Astragalus albens (Cushenbury Milkvetch, Fabaceae), a small milkvetch only found on limestone outcrops in one canyon in the entire world. The leaves and stems of this species are canescent–one of my favorite botanical terms that means covered in fine, white hairs giving a grayish appearance.

Linanthus maculata (San Bernardino Mountains Linanthus, Polemoniaceae), the most adorable of all plants ever. Yes that’s a dime, and no, they really don’t get any bigger.

In addition the target species, on a trip like this where I go through several habitats, I looked at a couple hundred species of flowers and photograph many of those that I haven’t seen before. In this case I took pictures of maybe 30 species. A few of the post-worthy species:

Nama pusilla (Small-leafed Nama, Boraginacaea). Another tiny white flower, not much bigger than the Linanthus.

Thamnosoma montana (Turpentine Broom, Rutaceae). A common desert shrub, but one of the few members of the mainly tropical citrus family in California. You can see the essential-oil-producing pellucid glands (dots) on the petals. The same structures give oranges and lemons their smell.

Erodium texicanum (Texas Filaree, Geraniaceae). The only species native to California in a genus of bad invasives. I may be biased, but I’m certain it’s the prettiest as well.

Astragalus coccineus (Scarlet Milkvetch, Fabaceae). A shockingly colored plant of desert foothills, I’m pretty sure this is the only red-flowered species in this diverse genus. I was almost as excited to find this, as I was its much rarer congener (second plant photo). It was also growing in Cushenbury Canyon.

Once again, however, the genus Phacelia (Boraginaceae) won the trip. I’ve already photographed maybe 20 of these species, but with 175 in the genus, the majority of which occur in the state, I definitely won’t run out any time soon. I found 5 new ones this trip. I’ll go from worst to best photo.

Phacelia pachyphylla (Thick-leafed Phacelia). The only place I saw this one was right next to some Mentzelia tridentata.

Phacelia longipes (Longstalk Phacelia). This is actually not a desert plant-I found it on a gravelly road cut on my way home through some chaparral in the Transverse Ranges. The early-evening lighting was amazing, and the plant is both beautiful and fairly uncommon, making this among my favorite photos I’ve ever taken. 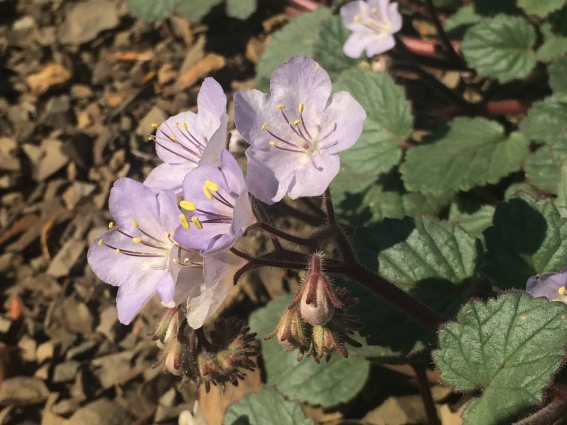 Okay (unless I get rained out) I’m going east next weekend for real this time.