My latest ramble was an overnight backpacking trip with one species as the main target–Erythronium pusaterii (Hockett Lakes Glacier Lily, Lilaceae). This species checks a number of boxes for me. It has large, beautiful flowers. It’s rare–only occurring in about 10 locations in Tulare County. And you have to work to see it, because all of those locations are in the backcountry, far from any roads. The genus Erythronium has about 30 species, occurring in northern North America and Eurasia. Some species–the fawn lilies–have leaves that are mottled with brown spots like the coat of a baby deer. These species tend to occur in mid-elevation forests. Here’s a repost of E. californicum (California Fawn Lily) from last spring: 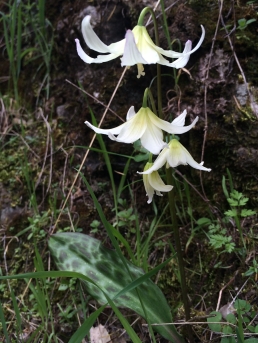 Others have all-green leaves and occur at higher elevations, blooming as the snow melts from rocky, treeless areas. These are glacier lilies, of which Erythronium pusaterii is the southernmost representative. In addition to being beautiful, all species are entirely edible, from their bulb to the flowers. Two populations of E. pusaterii occur along the Garfield Trail in the Southwestern corner of Sequoia National Park, so that’s where I headed. Along the drive there, I stopped for two other plants. Ceonothus pinetorum (Kern Ceanothus) is a beautiful low-growing bush with a crazy distribution. It’s only found on the Kern Plateau in the Southern Sierras and then way up in the Trinity Mountains in Northern California. 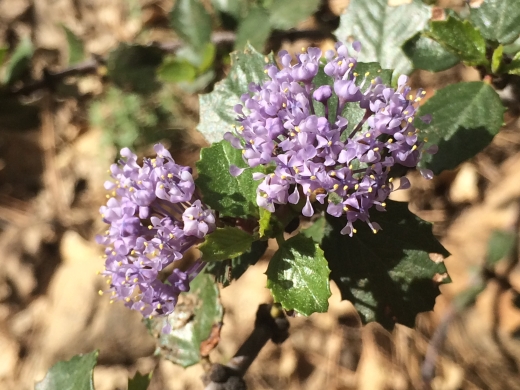 A few plants of the super rare Brodiaea insignis (Kaweah Bodiaea) were still blooming along the entrance road to the hike. This genus is characterized by modified stamens (staminodes) that presumably help orient pollinators when they visit the flower. A few posts ago, I showed off B santarosae, which had tiny staminodes for the genus. B. insignis is at the other extreme–its huge staminodes with inrolled edges stick straight up above the rest of the flower. 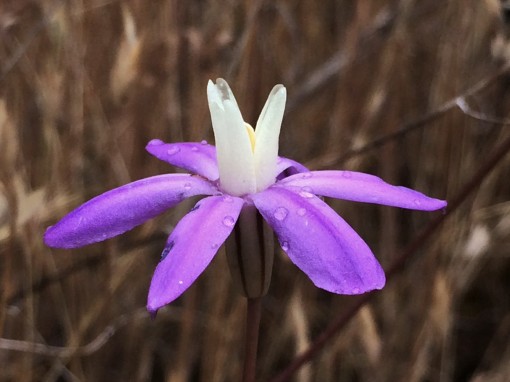 The hike itself was beautiful, but intense, starting under 4,000 feet in elevation, and ending at over 8,000. The first record of Erythronium pusaterii was a few miles in. The location description was for a spot along a creek upstream of where it crossed the trail. I arrived at the creek and looked up at steep ravine filled with boulders and waterfalls–beautiful, but not exactly the most inviting place for a walk. I figured I was here, so I might as well go for it. I set down my pack and started rock climbing. After about 45 minutes of progressively more challenging scrambles, I made it to an absolutely massive population! Unfortunately, almost all of the plants were already at their fruiting stage, but I did find a few still-open flowers. There were enough plants that I felt okay to snack on a couple leaves–delicious! 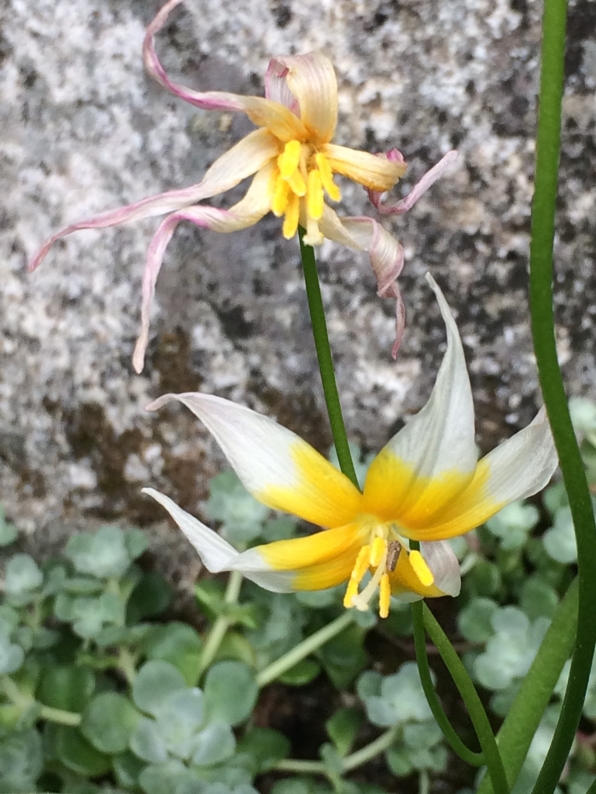 After the (slightly harrowing) decent, I continued up the trail, setting up camp for the night in a grove of Sequoiadendron giganteum (Giant Sequoia, Cupressaceae). It’s pretty amazing to sleep in the shade of the largest living thing on the planet!

The next day, I continued up the trail  for a few more miles before finding my way blocked by massive snow drifts and a raging river engorged from snowmelt. It’s after Memorial Day, but winter has not yet ended in the high Sierra. I wasn’t getting to that second population. It turned out that going for the first population when I did was a great decision. On the way back, it started to rain, and there was no way I would have attempted that scramble over slippery, wet rocks.

The hike, particularly at lower elevations, had plenty of wildflowers to keep me entertained. The most dramatic was Cornus nuttallii (Pacific Dogwood, Cornaceae) which was locally abundant. The white petal-y looking things on dogwoods are actually bracts–modified leaves that surround a cluster of small, non-showy flowers

Clarkia heterandra (Mountain Clarkia, Onagraceae) was also more numerous here than I’ve seen before. This is the only member of the genus (of ~40 species) with a nut-like fruit, rather than a long skinny capsule (a fruit that splits open). You can see the developing fruits as the bump below the petals.

Here are a couple common species in weird plant families and slightly embarrassing common names: Comandra umbellata (Bastard Toadflax, Comandraceae) and the inflated fruits of Staphylea bolanderi (Sierra Bladdernut, Staphyleaceae). It’s not often I don’t at least recognize the family to which a plant belongs, but my ignorance on these two makes sense. They are the only members of their families in California, and both only have one other species in North America.

I actually managed to find another couple rare plants on the hike. The first, the adorable Mimulus inconspicuus or M. acutidens (Kings River Monkeyflower, Phyrmaceae), I was somewhat expecting. I’m giving two scientific names here, because it keyed to the former species in the reference book I use, but I believe the southern populations, including this one, have been more recently split off into the latter taxa.

Finally, I found the rare Allium abramsii (Abrams’ Onion, Alliaceae) in the same spot as the Erythronium. This species wasn’t on my radar, as there wasn’t a known population in the area. I only snapped a couple (not particularly great) photos, because I was paying way more attention to the lily and I assumed it was Allium crispum, a much more common species. Both these species have cool wavy margins on their inner petals. When I got home, I realized not only does it look fairly different from A. crispum, that species doesn’t even occur in the Sierras. What a great bonus find! 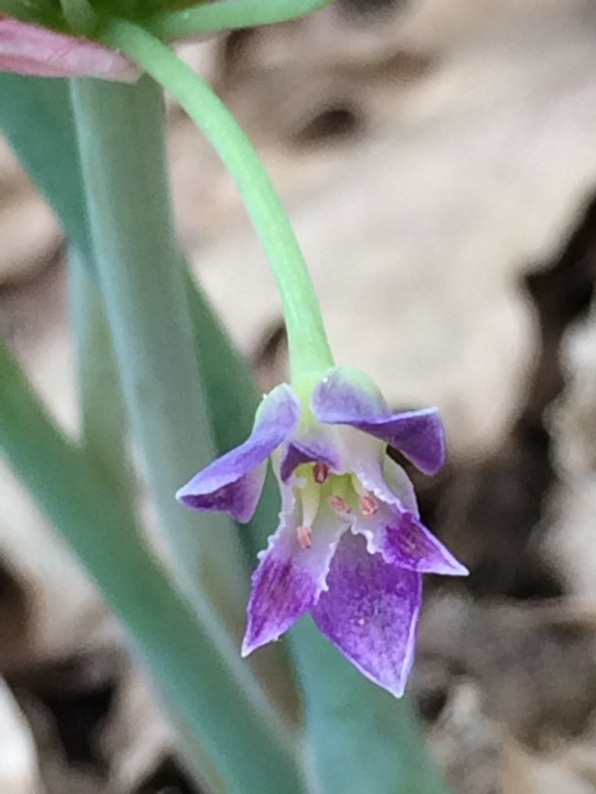 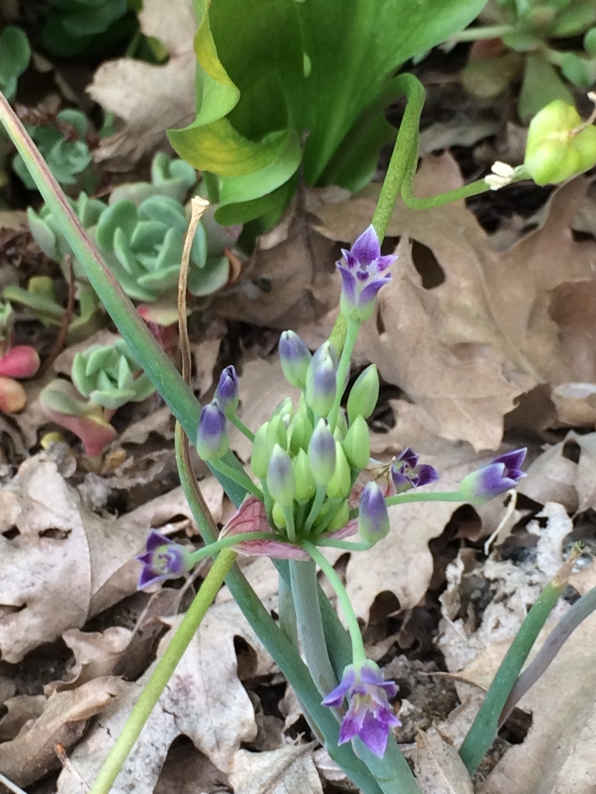