I went on a four day backpacking trip to the Trinity Alps in Northwestern California to look for some rare plants. The Trinity Alps are part of the Klamath Mountain Range–a large set of mountains that sits at the north end of the California Coast Ranges and west of the Southern end of the Cascade Range. There are three regions in the Trinity Alps, the Green Trinities, which are wetter, lower elevation mountains in the West, the White Trinities, the tallest, mostly granite mountains in the center of the range and the easternmost Red Trinities, primarily formed from Iron-rich Serpentinite. I hiked in the Red Trinities which has the most rare plants due to these strange red serpentine soils. Most the hiking was between 5,000 and 7,500 feet in elevation. While many of the mountains there looked like this

There was also plenty of granite, which looked like this

I took a crazy number of plant photos, but I’ve chosen my twenty-one favorites. I’ll start with some more widely distributed species, before getting to all the rare goodies. I’ll also give a bit about the habitat of each species

Corallorhiza mertensiana (Pacific Coralroot, Orchidaceae). A parasitic (non-photosynthetic) orchid that was common in dense conifer forest, this species only makes it into Northwestern California, but is also found throughout much of the rest of the west. 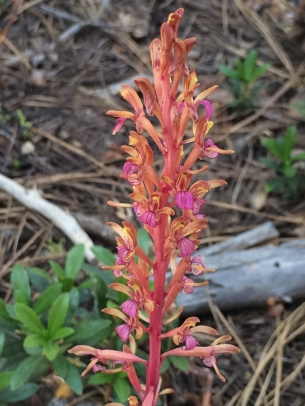 Frasera albicaulis (Whitestem Frasera, Gentianaceae). These were at the lower elevations of my hike in open forest and chaparral. Check out the cool fringed nectary on each petal (the green spot). 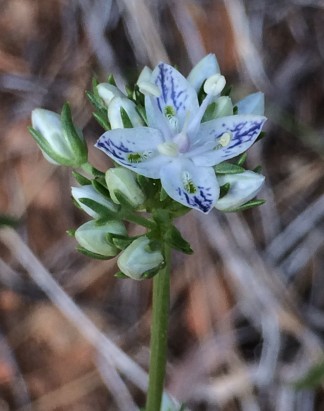 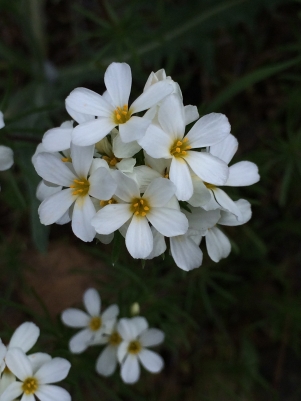 Both of these plants in Polemoniaceae have broad distributions on my hike I only found them in one area (the former in a meadow with granite soils and the later at a gravelly pass). 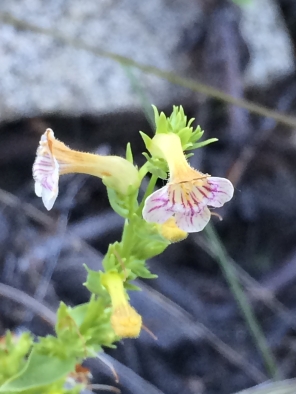 The sepals are fringed with red glands, which you can see in the right photo. I found several other species related to both of these, including the rare Lewisia cotyledon heckneri, which was unfortunately finished flowering.

Narthecium californicum (California Bog Asphodel). The only California species in the Nartheciaceae family, it blanketed some marshy meadows in yellow, but was strangely absent from others

The rest of the species I’ll show are pretty much only found on serpentine soils. That starts with two uncommon white lilies: Lilium washingtonianum purpurascens (Purple-flowered Cascade Lily)

These two both occurred in chaparral and while most individuals were easily distinguishable from each other (the former had  larger, more horizontal flowers and a style that stuck out past the anthers), some plants seemed intermediate, leading me to think there may have been some hybridization going on.

Next, two small, white, uncommon flowers of open conifer forest on serpentine soil, both in the Caryophyllaceae 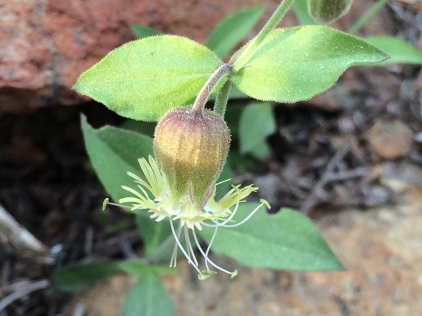 I struck out on finding another, super rare Silene with salmon-colored flowers.

One of the reasons I wanted to do this trip was to see the bizarre Darlingtonia californica (California Pitcher Plant or Cobra Lily, Sarraceniaceae). I saw this plant of serpentine bogs in Northern California and Western Oregon, at several spots on my hike. The strange flower has a specialist bee pollinator, but the Cobra-shaped leaves are designed to trap insects, being filled with water and flesh-eating bacteria. The decaying bugs supplement the plant’s intake of nitrogen, which can be limiting in nutrient-poor bogs. 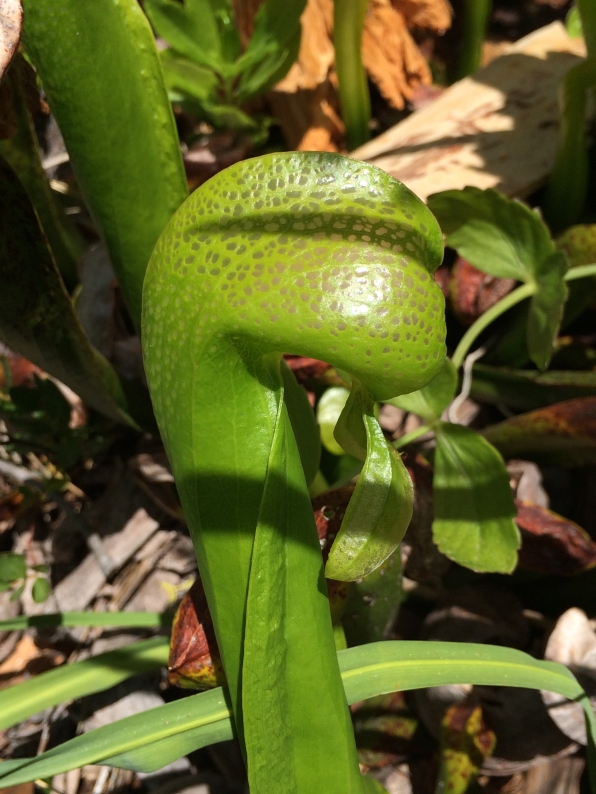 But while uncommon, the Cobra Lily was not nearly the rarest plant on my hike. These last six plants are only found in the Klamath Mountains. Two of these were sunflowers (Asteraceae) that I found in a couple marshy streams: Raillardella pringlei (Showy Raillardella). 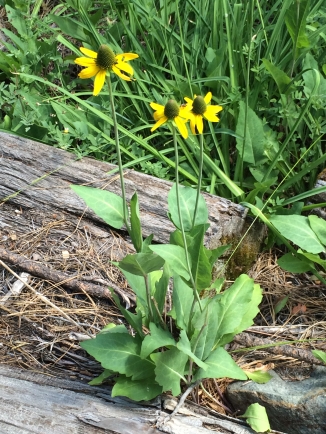 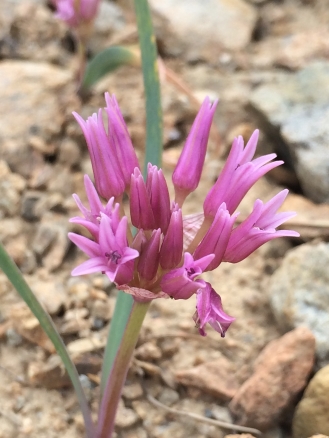 The latter was particularly adorably small.

I happened to run across Epilobium siskiyouense (Siskiyou Willowherb, Onagraceae), growing in a scree slope (loose rocks) above a beautiful alpine lake. 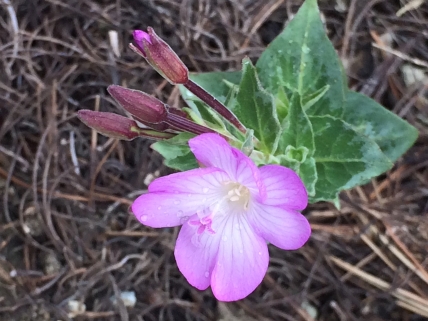 While I found the willowherb by chance, I specifically sought out my favorite plant of the trip, Howellanthus dalesianus (Scott Mountain Phacelia, Boraginaceae)

I know many of the other plants in this post are showier, but in addition to being super rare, this species is the only one in its recently recognized genus. I love its round fuzzy leaves and bright purple anthers. It’s a real plant-lover’s plant. To find it, I hiked 5 miles out of my way down a little used trail. The trail was so bad, that I lost it for about half a mile as it traversed some wet meadows, and had to do some pretty serious navigation. What’s more, it was raining. I was super excited when I finally came across a giant patch of it growing on a conifer forest-covered ridge-top.

With that, my botanical adventures may be coming to an end for the year. The flowering season is winding down here in California, and I have a new job in Bakersfield starting next month for which I need to prepare. However, my new Southern California locale should put me in  range of a whole new set of wildflowers next year, so the rambles will continue.