A few days ago, I headed up to McLaughlin Reserve and the surrounding area to do a little late-season botany. Last summer, a series of fires burned large portions of Lake County, in California’s inner North Coast Ranges. While wildfire can terrible because it destroys homes (about half the town of Middletown burned in these fires) and plans (a few McLaughlin researchers lost field experiments last year), it is a natural part of the ecosystem. In fact, there are many species of plants called “fire-followers”. These plants are rare or non-existent most years but can occur in spectacularly large numbers in the  few years after a fire. Why? Fire clears out the larger plants, reducing competition and giving smaller plants a chance. Additionally, fire quickly releases carbon and other nutrients in the soil that were previously bound up in wood and evergreen leaves. Fire-followers may be adapted to take advantage of this nutrient pulse. Finally, fire changes the hydrology of an area. Because there are fewer roots to absorb water, there is more runoff into seeps and streams, which means more permanent water later into the summer.Some fire-followers make sure they take advantage of these favorable conditions by having seeds that rely on a smoke or heat cue to germinate. Once they bloom and set seed, their offspring will remain dormant in the seed bank until the next fire, which may take decades.

While I was a bit late for the peak bloom, I did manage to catch a number of fire followers. Navarretia linearifolia pinnatisecta (Pinnate-leaved Navarretia, Polemoniaceae) was covering the areas along burned serpentine seeps, where in previous years I found only a couple plants (see last May’s post for more about serpentine).

On a burned non-serpentine area, we found a patch of Nicotiana quadrivalvis (Indian Tobacco), a hawkmoth-pollinated plant only recorded on the reserve right after fires. 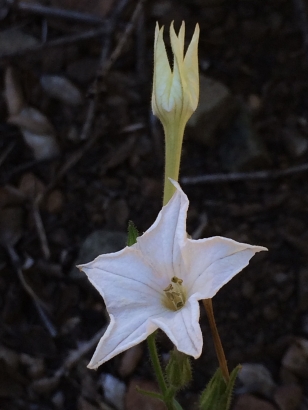 Some of the burned hillsides were absolutely covered with the strange Ehrendorferia chysantha (Golden Eardrops, Papaveraceae). 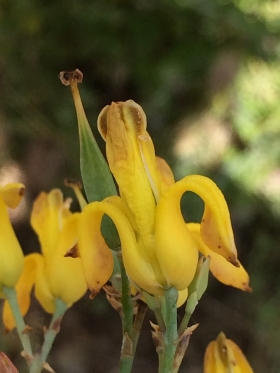 Finally, there was a decent number of Argemone munita (Prickly Poppy, Papaveraceae), which as far as I know had never been recorded on the reserve before this year.

Interestingly, this species is not a fire follower elsewhere in California–I saw plenty in non-burned areas in Southern California.

On a tip from a fellow botanist, after a couple days at McLauglin, I headed North, down a back road through some nice serpentine habitat that I hadn’t previously explored. I found some wet meadows (swales) that still had lots blooming, including Packera clevelandii (Cleveland’s Ragwort) and Cirsium douglasii (Swamp Thistle, both Asteraceae in the first picture), and Astragalus clevelandii (Cleveland’s Milk Vetch, Fabaceae).

On this drive, I found a couple of cool plants that I struggled to get a great photo of. The first, Nemacladus capillaris (Threadplant, Campanulaceae), was tricky because it’s so darn small. The whole flower is only about a millimeter long.

The second, Harmonia hallii (Hall’s Harmonia, Asteraceae) was cool because of the overall shape of the plant, which was really hard to capture in one picture

Harmonia is a genus of five plants, all of which are rare and only found in North-west California.

I did manage to get a good picture of my favorite plant of the trip, Orobanche valida (Howell’s Broomrape, Orobanche).

All Orobanche are entirely parasitic plants–they don’t photosynthesize, and thus don’t have any green parts. Rather they tap into the roots of other plants (usually shrubs) and steal their nutrients. While some species, like Orobanche fasciculata (Clustered Broomrape, below, also found on this trip) can parasitize a few different genera of shrubs, Orobanche valida is a specialist on Garrya (Silk-Tassel Bush) and is only found very locally. 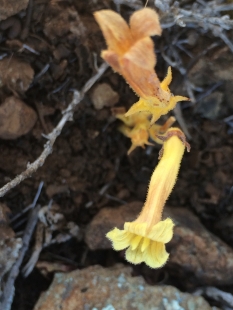 We are getting pretty late in the year for lower-elevation flowers, so I guess it’s time to head to the mountains!

One thought on “Lake County Fire”