The Supercourse spent a week and a half at the Landels Hill Big Creek Preserve on the Big Sur Coast of Monterey conducting their final projects. In between helping students design some really cool studies (only one of the seven groups focused on plants, but that’s okay), I tracked down some flowers, a few of which are only or predominately found in the Santa Lucia Mountains of Big Sur. I’ll share eight plants, arranged from largest to smallest range size.

Delphinium nudicaule (Red Larkspur, Ranunculaceae). This favorite of hummingbirds is found in woodlands throughout the northern half of the state and into Oregon. Its a showstopper–if it’s blooming, people notice.

Antirrhinum multiflorum (Chaparral Snapdragon, Plantaginaceae). It’s range heads the opposite direction from the previous species, going from the SF Bay Area south through the Coast ranges into Mexico.

Clintonia andrewsiana (Bluebead Lily, Liliaceae). We are already on to species with fairly restricted ranges. This species is an uncommon Redwood Forest specialist that reaches its southern range edge at Big Creek along with the Redwood. 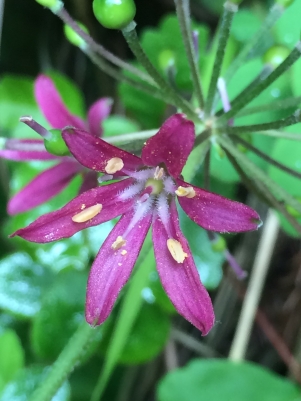 Mimulus aurantiacus grandiflorus (Bigflower Sticky Monkeyflower). This is an especially showy variety of a much more common species. It has a funky distribution, occurring only on steep, rocky hillsides the Northern South Coast Ranges and in the Northern Sierra Foothills. 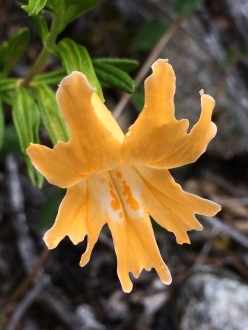 Sanicula hoffmannii (Hoffmann’s Snakeroot, Apiaceae). This is the first truly rare plant of the post, found only in a few shrubby areas along the Central Coast of California and a couple of the Channel Islands. Okay, it has boring flowers, but I think it’s leaves are pretty cool.

Pedicularis dudleyi (Dudley’s Lousewort, Orobanchaceae). This is actually the rarest plant on this post in terms of number of individuals, but the few populations are widely scattered along the Central Coast from San Luis Obispo to San Mateo. It’s past flowering in this picture (the bottom part of the photo shows the ripening fruits), but we made a special trip to see it, so it’s worth a shout out.

Arctostaphylos hooverii (Hoover’s Manzanita, Ericaceae). This is a true Big Sur endemic, one of many extremely range-restricted species of Manzanita found along the central coast of California. It’s recognizable by its dense glandular hairs on the stem and large berries

And finally, Abies bracteata (Bristlecone Fir, Pinaceae). This is the iconic tree of the Big Sur Wilderness–only found in isolated groves on steep hillsides where fire doesn’t reach.

I’ll post a few flowers from the Supercourse home base of Blue Oak reserve in a bit. And then who knows from where the next flower will come!

One thought on “Big Creek”