I’ve been really busy these past couple months and haven’t had time to post flower pictures as often as I would like. I’m about to head out to help teach a field course, which will take me to across California over the next seven weeks. Before I do, I figured I would do a quick post of the 10 most interesting flowers I’ve photographed in the last couple months. These photos come from 3 locations in the South Coast Ranges,  Big Creek Preserve in coastal Monterey County, Stathearn Ranch in North-Eastern San Benito County, and the Panoche Hills area in Western Fresno County. I don’t have time to say much more than a sentence or two about each species, but I’ll give the location and habitat in which I found it, and a quick blurb about why each species made my top ten.

Delphinium hutchinsoniae (Monterey Larkspur, Ranunculaceae, Big Creek, Coastal Chaparral). This species is only found along the coast of Monterey county. It was blooming in the thousands of individuals, making for an incredible display.

Mirabilis laevis (California Four O’Clock, Big Creek, Chaparral). This plant is in the strange Nyctaginaceae family–the same family as Abronia (Sand Verbena). According to Cal Flora, Big Creek is the northernmost coastal population of this species. 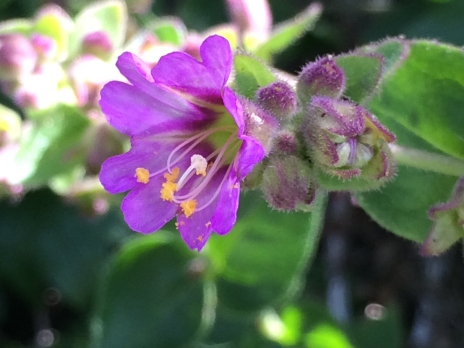 Paeonia californica (California Peony, Paeoniaceae, Big Creek, Chaparral). As with the previous species, it reaches its northern range limit at Big Creek. It’s one of two species in the family found in California. I was lucky to find this individual, as most plants were already setting fruit.

Tetrapteron graciliflorum (Hill Cups, Onagraceae, Strathearn, Valley Grassland). I love the four-ridged fruits on this tiny Evening Primrose. One is sitting just below the flower in this photo. 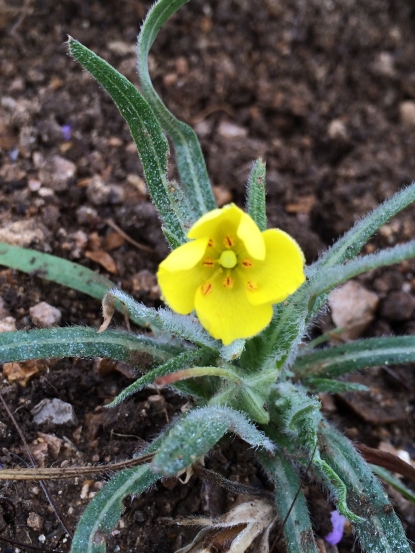 Caulanthus flavescens (California Yellow Mustard, Brassicaceae, Strathearn, Valley Grassland). A lame common name for a really interesting, range-restricted plant. This species is usually found on serpentine soils, making it a really unusual find on this property, which does not have serpentine.

Streptanthus insignis insignis (San Benito Jewelflower, Brassicaceae, road to Panoche, Chaparral). This species is in a genus related to the previous one (they are sometimes both called Jewelflowers). It is only found in the Inner South Coast Ranges. The purple blob at the top of the left photo is a strange cluster of sterile flowers.

Tonella tenella (Lesser Baby Innocence, Plantaginaceae, road to Panoche Woodland). It’s not often I’m completely stumped in the field by a plant in California any more. This tiny flower (only a couple millimeters wide), left me scratching my head until I made an educated family guess based on the fruits.

Mentzelia affinis (Yellow Comet, Loasaceae, Panoche, Valley Grassland). I love the spray of stamens and wierdly-shaped fruits found in this genus of show- stoppers. We found this species growing on a super dry roadcut in harsh gypsum soils. 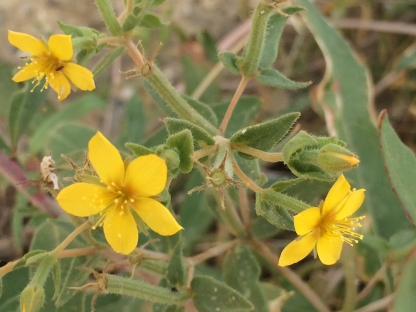 Amsinckia furcata (Forked Fiddleneck, Boraginaceae, Panoche, Valley Grassland). One of the showiest species in this genus, it is very range restricted and habitat specific. However, where it does occur, it can be the only plant growning on the entire hillside. 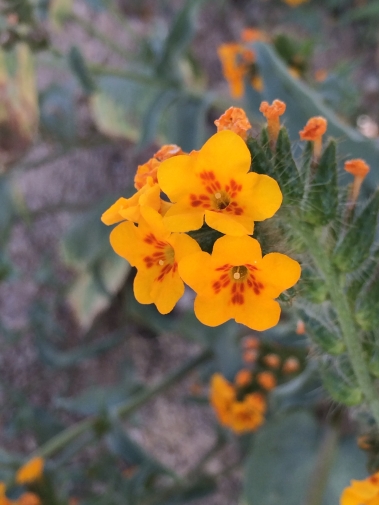 That’s all for now. I will try to add a blog post for each of the 6 reserves we visit over the next seven weeks.