I spent most of May Studying this plant at the McLaughlin Natural Reserve:

McLaughlin is located in the Inner Coast Ranges of Northern California at the intersection of Napa, Lake, and Yolo conties. The site is well known for its large areas of serpentinite–a metamorphic rock created as the earth’s mantle is pushed upward at a tectonic plate boundary and transformed by heat and water. Serpentinite is a bluish or greenish rock full of heavy metals including gold–the site was a gold mine until recently. These metals are generally toxic to plants. Combined with a generally high (basic) pH and low availability of Calcium (an important plant macronutrient), the serpentine soils derived from these rocks are a uniquely harsh environment. The plants that do grow on these soils have evolved various ways of dealing with the conditions, and in doing so have often become new species, reproductively isolated from their non-serpentine relatives. Thus in addition to being a literal gold mine, McLaughlin and the surrounding area is a metaphorical gold mine of rare plants. There are actually several serpentine habitats including chaparral, barrens, and grasslands, all of which can be seen in this picture.

Wildflowers are especially diverse in wetter areas of serpintine including seeps (locations on a hillside where the water table reaches the surface) and swales (marshy depressions in grasslands, shown here).

Okay, onto the plants! When looking at my photos for this month, I noticed I had a bunch of pairs of species in the same genus. Therefore, despite hating that our culture has latched onto the pseudoscience of astrology, I will commemorate our being under the sign of Gemini by presenting some plant twins. It was too good a coincidence to pass up. Besides giving the plant family, I’ll also describe the habitat for each plant and whether it’s a serpentine endemic (only found on serpentine), an indicator (usually found on serpentine) a tolerator (sometimes found on serpentine), or a plant that was not growing on serpentine soils. 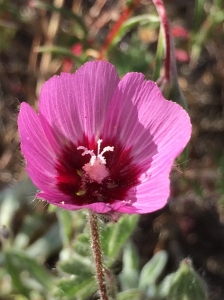 S. diploscypha actually comes in two color morphs that can both be found in the same population. The other morph has white petal bases like in S. oregana. However, both morphs of the former species are hairier, shorter, and fewer-flowered than S. oregana, so telling them apart is not difficult. 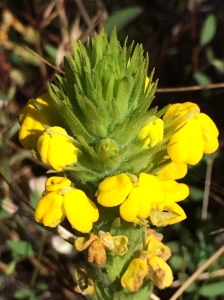 C. rubicundula has two subspecies that occur around McLaughlin. This is C. r. lithospermoides. The other subspecies, C. r. rubicundula, has white flowers and is a rare serpentine endemic.  C. applegatei is a a more widely distributed (although nowhere common) species that usually has red flowers. This is the first time I’ve ever seen it in yellow, but it still has the sticky, wavy leaves characteristic of the species.

Both of these clovers are relatively common throughout California, but I really like these shots. Many people think of clovers as non-native lawn/pasture weeds, and we certainly have several of them in California, but there are dozens of native species in the state, some of which are quite rare. Once pollinated, the petals of T. fucatum turn red and inflate, presumably helping to protect the seed pod from predators.

Calachortus is a diverse genus of about 70 species all of which are found in Western North America. They all have showy petals that contain nectar to attract a diverse set of pollinators. The nectar-containing part of the petal, the nectary, varies in shape, size and hairiness among species, and thus is useful for identification. The nectary in in C. vestae is the double crescent or “W shaped” patch of dense brown hairs under the reddish brown spot on the right side of the image. This confirms the identification as this species and not, say, the similiar C. venustus, which has a square nectary. 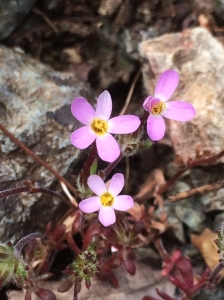 Both of these species open during the day and are pollinated by long-tongued flies. However other species in the genus have white petals, open in the evening, and are visited by hawkmoths.

I love Streptanthus. They are bizarre-looking, many of them are rare, and they always seem to be buzzing with native bees. 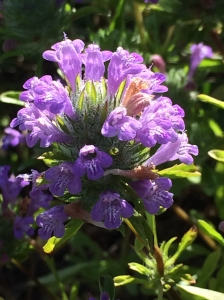 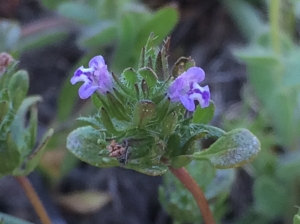 I had never found a calicoflower before this spring, and therefore this beautiful genus was high on my list of targets this month. In low wet depressions in meadows with compacted soil these guys can just carpet the area–quite the sight. 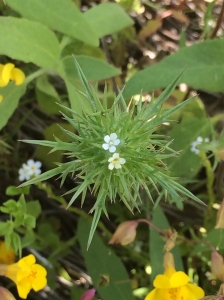 Including the left picture twice wasn’t a mistake. The purple flower under the Downingia is a super-rare plant that’s only found in Lake and Sonoma Counties. But it’s not the rarest Navarretia I photographed this month. N. paradoxinota is only found in a few serpentine swales in Lake and Napa counties. It’s so rare, it was only recognized as a new species in 2013, when it was found to be quite genetically distinct from the morphologically similiar N. intertexta. 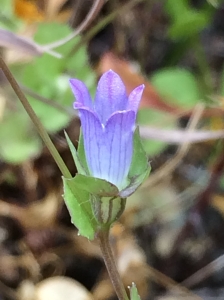 These are in two closely related genera. Despite the dramatically different appearance, they are in the same family as Downingia.

And now for three plants without a twin.

Calycantus occidentalis (Spicebush, non-serpentine, streambanks). Calacanthaceae. This bush is widely planted as an ornamental, but it’s only native to foothills in California. 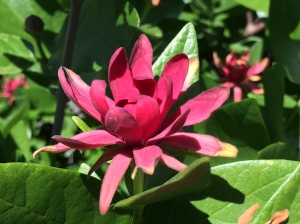 Horkelia bolanderi (Bolander’s Horkelia, non-serpentine, Rosaceae). While this last plant doesn’t grow on serpentine, it is quite rare and has very specific habitat requirements. It only occurs at the border between swales and Pine forest in southern Lake County. 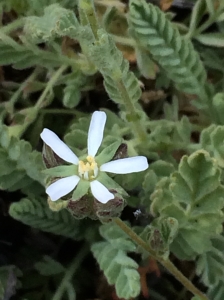 That’s it for May. While I’ll be spending much less time outside during the next couple of months, hopefully I’ll be able to make a few trips into the mountains as the higher elevation species come into bloom.

One thought on “May”