In April I broke my personal record of flower photos taken in a month (set last month). Flowers continue to bloom a few weeks ahead of schedule due to the abnormally warm winter. I botanized in three general locations this month: Santa Cruz County, including the unique Sandhills habitat, coastal Monterey, and the inner South Coast Ranges. I photographed probably close to 100 plants this month, but I’ve winnowed the list down to my 25 favorites. I’ll start with some some Santa Cruz plants.

Brodiaea terrestris (Dwarf Brodiaea, Themidaceae). This small lily is found in the coastal prairie habitat on campus. The white things around the stamens are called staminodes. They are modified sterile stamens that may help orient a potential pollinator (and are also useful in species identification). As always, click on the picture to enlarge.

Calochortus albus (White Globe Lily, Liliaceae). Another common lily on campus, occuring along forest edges. The bulge in the petal is the nectary.

Polygala californica (California Milkwort). Another common campus plant. People often mistake it for something in the Pea Family, but it’s actually in a closely related small family of its own (Polygalaceae).

Limnanthes douglasii (Common Meadowfoam, Limnaceae). This plant occurs in wet depressions or seeps in fields, often totally blanketing an area. Some populations have yellow at the base of the petals. It’s actually rare in the county, this population is on private property in the mountains near Ben Lomond.

The last three photos from Santa Cruz this month were taken in the Zayante Sandhills. Sandhills are the most unique habitat in the county. They are the remains of an ancient seabed that was pushed upwards as the Santa Cruz mountains formed.

Hesperomecon linearis (Carnival Poppy, Papaveraceae). This little poppy is restricted to the Sandhills in the county, but it occurs in other habitats elsewhere in California

Chorizanthe pungens hartwegiana (Ben Lomond Spineflower, Polygonaceae). One of three varieties of the Monterey Spineflower, all of which are rare. This variety is only found in the Sandhills, where it carpets the ground in places.

In early April, I took a trip down to the Monterey Peninsula to botanize in the coastal sand dunes and the Monterey Pine Forest. Monterey county has one of the most diverse floras of any county in the US. There are over 2000 species of plants recorded in the county–roughly the same number as all of Pennsylvania. The Monterey Peninsula is a particularly diverse region, with a ton of range-restricted plants, and I had never botanized it before. It was not a disappointing trip. I started in the dunes, which look like this: 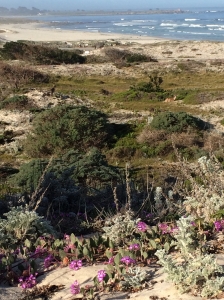 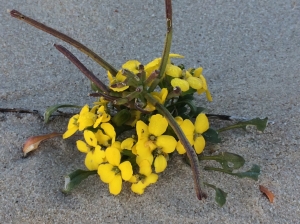 Yes, that is two endangered Wallflower photos this month. They are both related to the more common Erisymum capitatum which is found throughout the western states. I also took pictures of that species, which locally has orange flowers, but it didn’t make the cut under my strict 25 photo limit.

Also along the coast was this cool pea plant, Astragalus nuttallii (Ocean Bluff Milkvetch, Fabaceae). The weird things in the lower left of the photo are the inflated pea pods.

I also found several range-restricted plants in the Monterey Pine forest which looks like this:

Pinus radiata (Monterey Pine) is only native to a few groves on the central coast of California, but it is one of the most widely planted trees in the world. Because it grows very quickly, its soft wood is one of the most common sources of both lumber and pulp. It’s also invasive in some places. The understory of native Monterey Pine forest is dominated by Vaccinium ovatum (California Huckleberry), and the rare Hesperocyparis goveniana (Gowen’s Cypress). Here are two plants I found in the Monterey Pine forest understory that are restricted to the Central Coast of California: 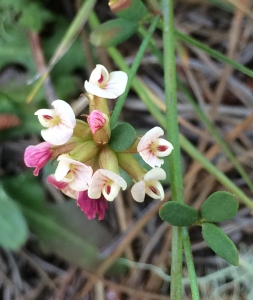 And here are two more common plants from my Monterrey trip: 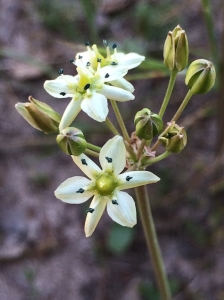 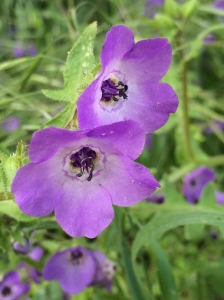 The last group of this month’s photos come from the South Inner Coast Ranges, where I was doing pollinator work on Clarkia breweri (Fairy Fans, Onagraceae)

We are comparing at the quality and quantity of pollen that is deposited on the stigma (the white four-lobed thing at the bottom of the flower) after one visit by either a hawkmoth or a bee. This species grows on steep rocky slopes in chaparral, sometimes on harsh serpentine soils. Conveniently, this habitat has a lot of other interesting wildflower, so I could take photos during breaks in the action. The first location was along Del Puerto Canyon Road, which had these cool plants:

Acanthomintha lanceolata (Santa Clara Thornmint, Lamiaceae). This genus of spiny mints has only four species, all of which grow on harsh soils, and have very small ranges in southern California.

Eremothera boothii decorticans (Shredding Evening Primrose, Onagraceae). Zoom in on a flower  to check out the cool contrast between the yellow pollen (with the sticky threads characteristic of the Onagraceae family) and red stigma. 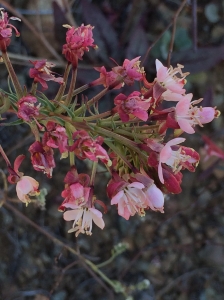 Mentzelia lindleyi (Lindley’s Blazing Star, Loasaceae). This range-restricted showstopper occurs in dense patches on hillsides and has flowers that are a good 3 inches across. 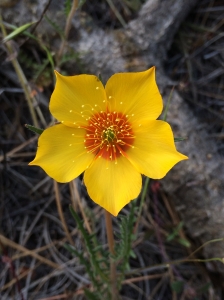 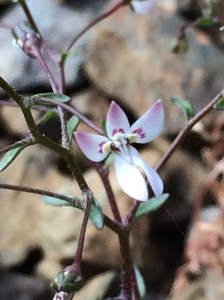 We also worked at Pinnacles National Park. In some chaparral on the drive there, I found two of my favorite non-serpentine chaparral plants. Both are in the mint family. 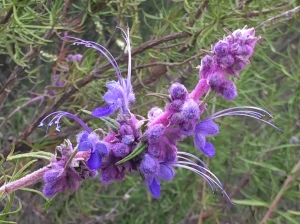 Co-occuring with Clarkia breweri at Pinnicles were two other species in the genus, including this beautiful Clarkia cylindrica (Speckled Clarkia, Onagraceae). This species has 8 anthers in two groups of four. The inner anthers have yellow pollen and the outer ones have purple pollen. No one knows why. The photo is of a newly opened flower, so the anthers are just starting to split apart, but you can still see the color difference.

Also present was Lewisia rediviva (Bitter Root, Montiaceae). The genus Clarkia was named after the explorer William Clark, while Lewisia was named after his partner Meriwether Lewis, so that whole expedition was well represented here.

I’ll end with a plant that’s not very showy, but it’s both adorable and rare, found only in Northern Monterey and San Benito county. Eriogonum nortonii (Pinnacles Buckwheat). The whole plant is only a few inches across. It was growing in the shade of its shrubby and super common cousin Eriogonum fasciculatum California Buckwheat), and immediately set my rare plant sense to tingling. 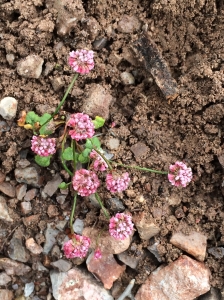 Hopefully more tingles are in store next month as I head up to the endemic-rich McLaughlin Bio Station for a month of fieldwork. Stay Tuned…